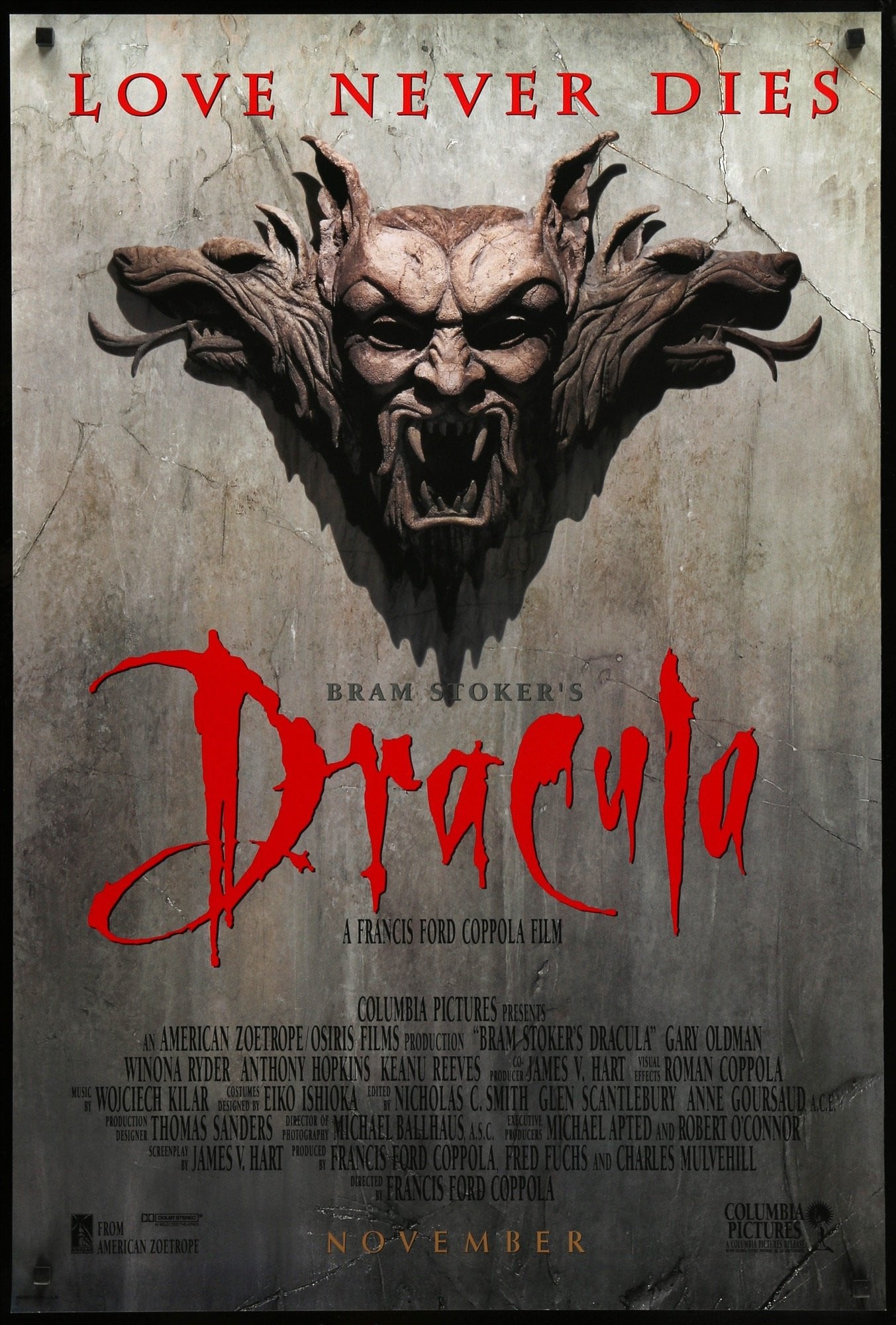 Bram Stoker’s Dracula is a 1992 American gothic horror film directed and produced by Francis Ford Coppola, based on the 1897 novel Dracula by Bram Stoker.
It was theatrically released in the United States on November 13, 1992. 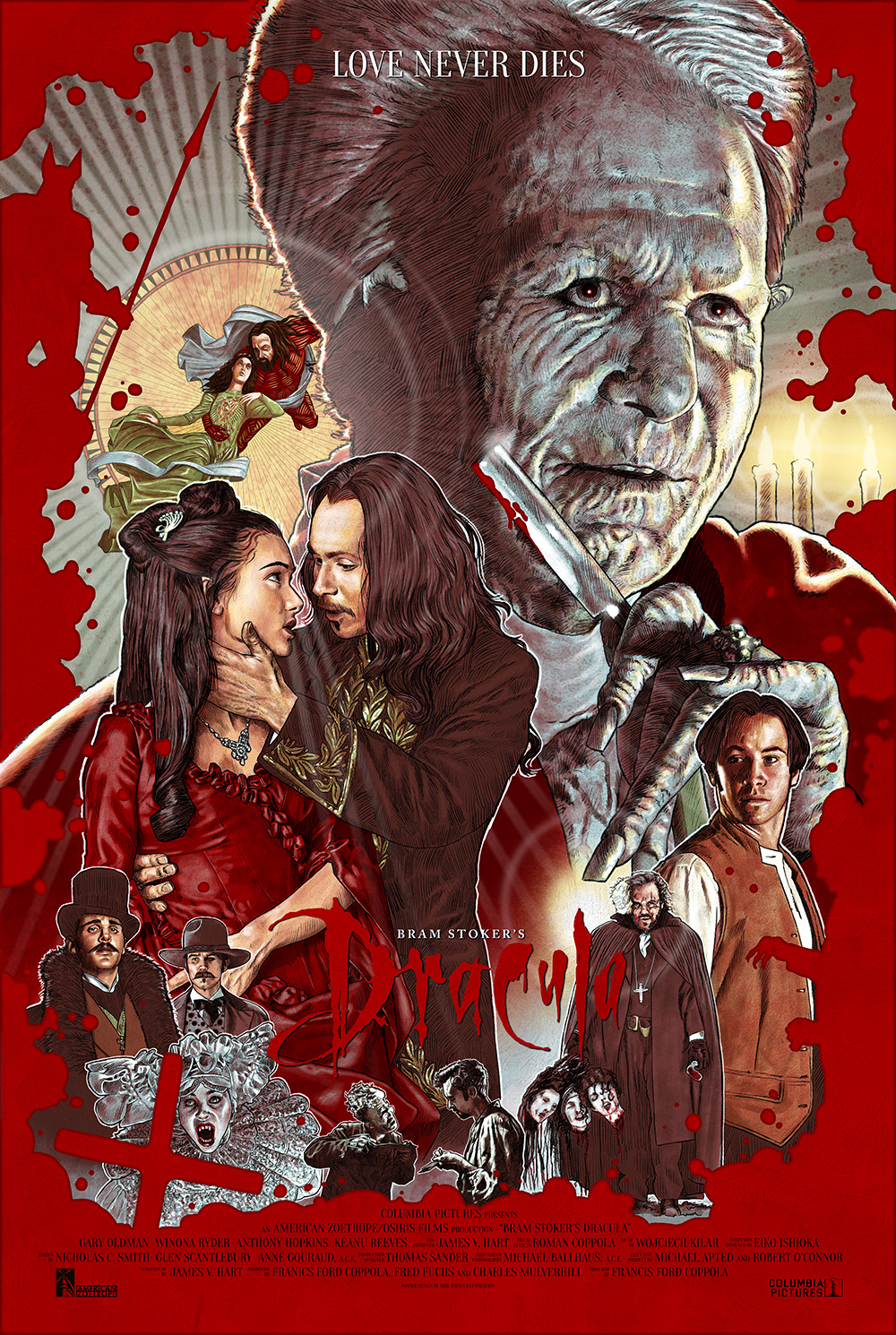 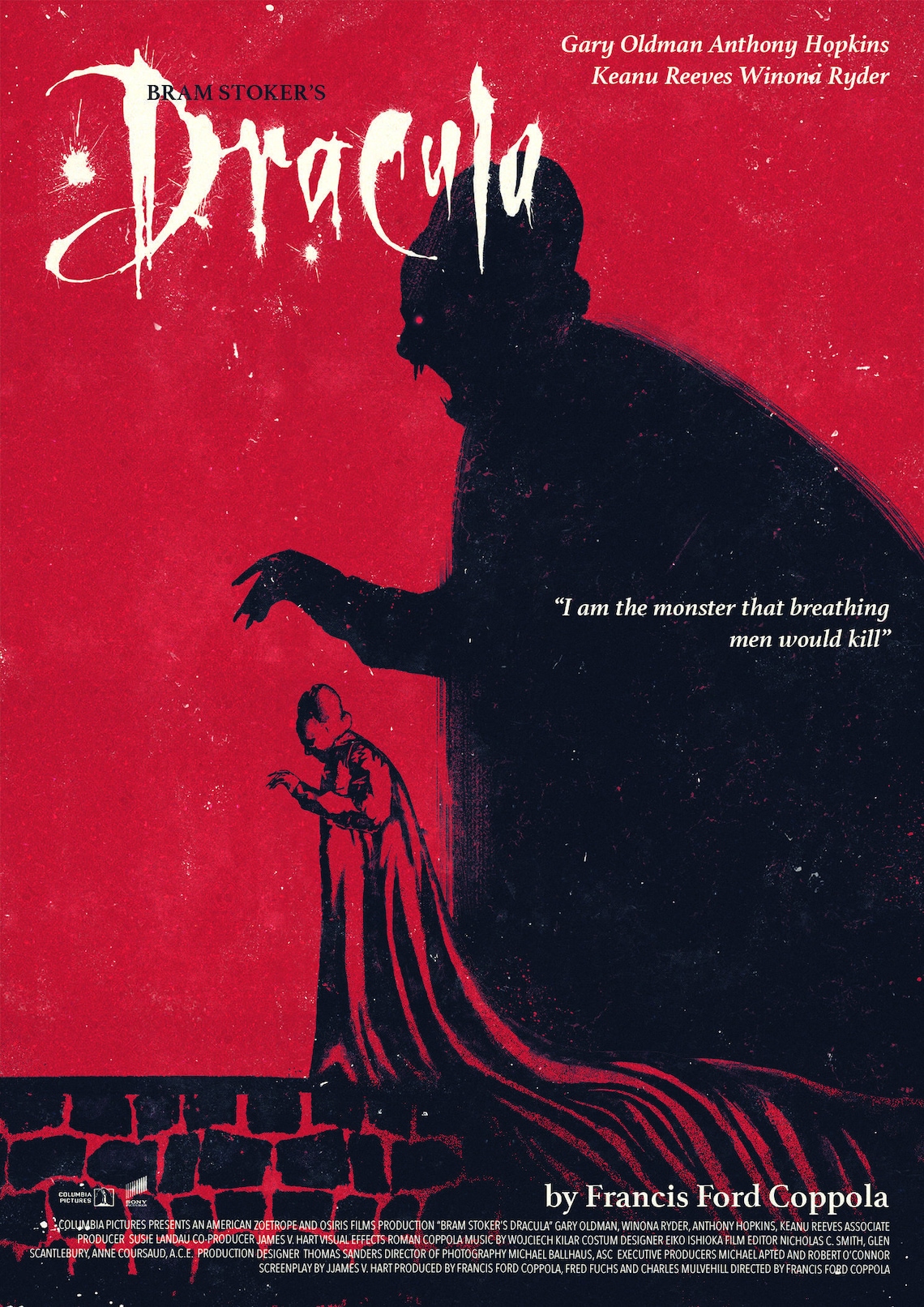 The film opened at #1 in the United States, and grossed $215 million against a production budget of $40 million.
It was nominated for four Academy Awards, of which it won three for Best Costume Design, Best Sound Editing, and Best Makeup while also being nominated for Best Art Direction.
Its score was composed by Wojciech Kilar and its closing credits theme “Love Song for a Vampire”, written and performed by Annie Lennox, became an international success. 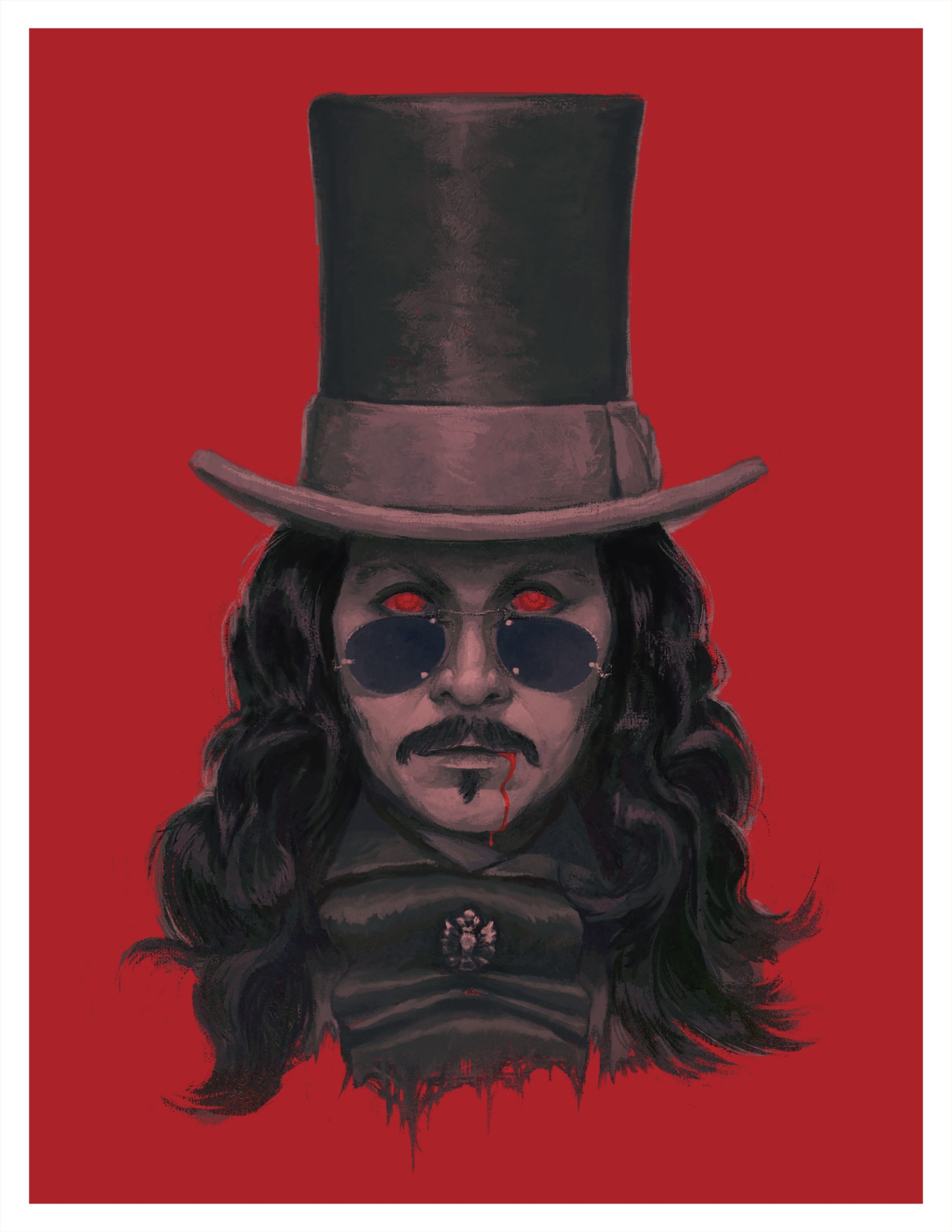 In 1462, Vlad Dracula returns from a victory in his campaign against the Ottoman Empire to find his wife Elisabeta committed suicide after his enemies falsely reported his death.
A priest tells him that his wife’s soul is damned to Hell for committing suicide.
Enraged, Vlad desecrates the chapel and renounces God, declaring he will rise from the grave to avenge Elisabeta with all the powers of darkness.
He then drives his sword into the chapel’s stone cross and drinks the blood that pours from it, becoming a vampire. 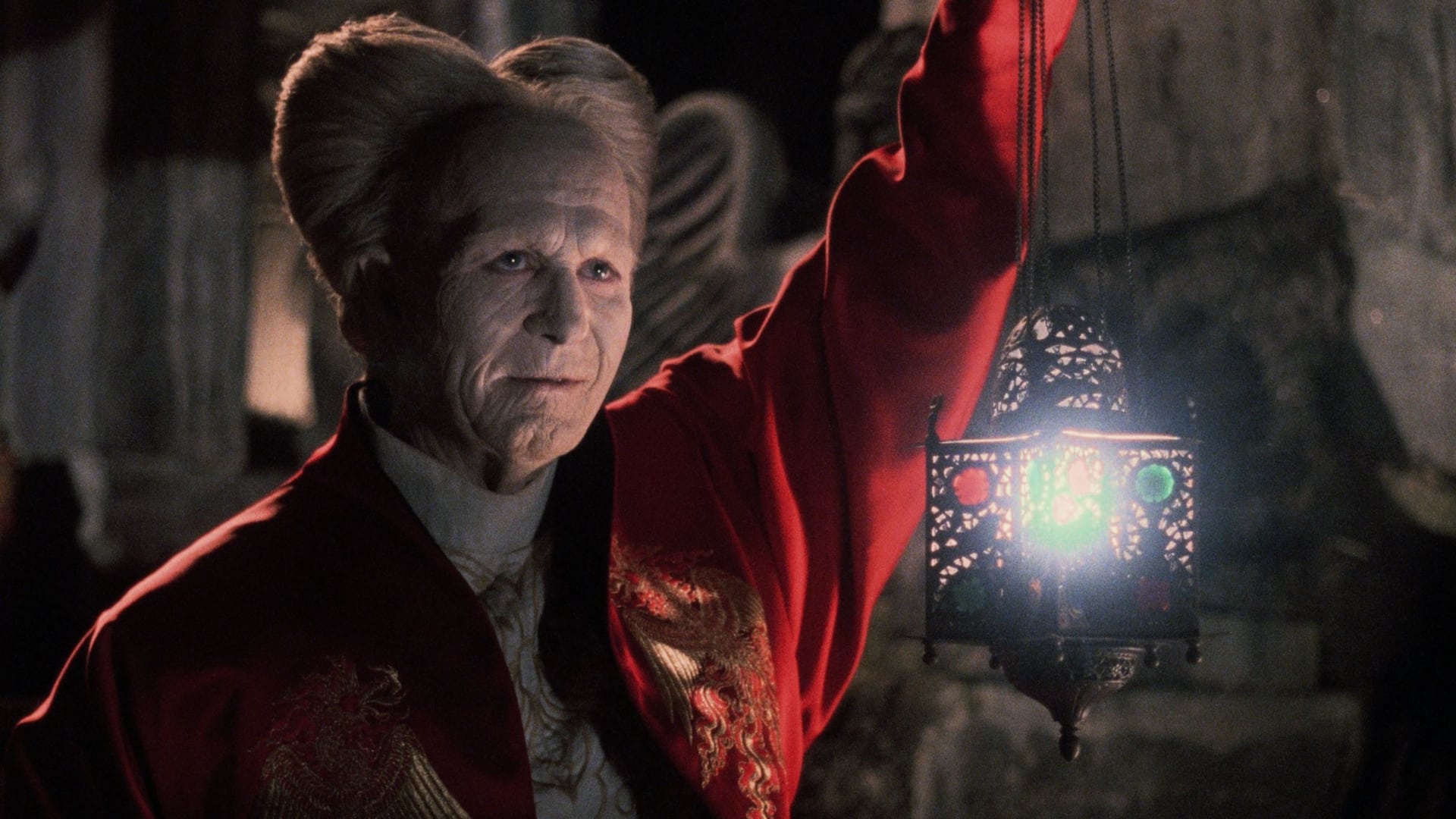 Coppola chose to invest a significant amount of the budget in costumes in order to showcase the actors, whom he considered the “jewels” of the feature.
Costume design by Eiko Ishioka created a new image for the Count and for the first time freed him from the black cape and evening wear the character had become associated with since Bela Lugosi‘s portrayal in 1931. 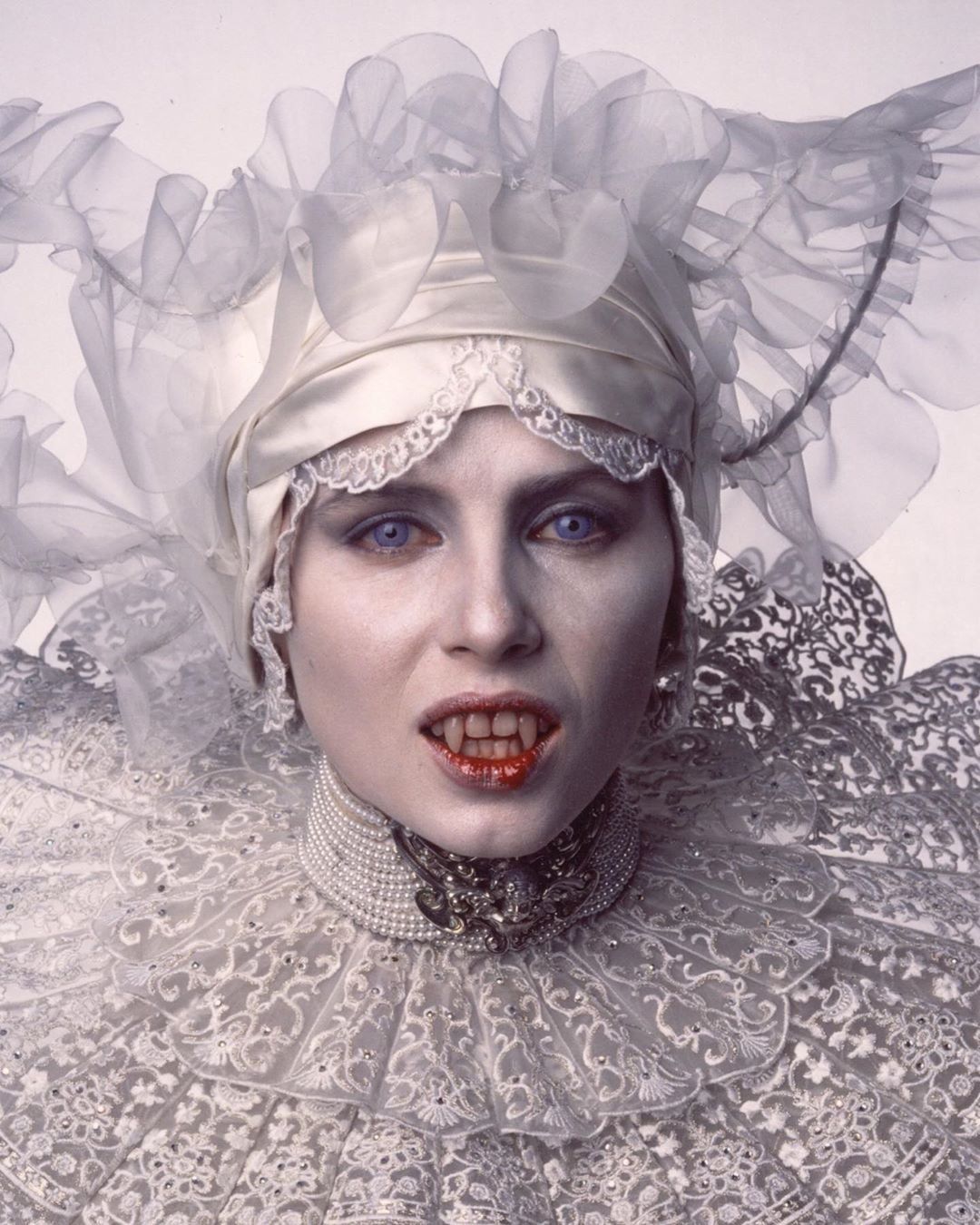 Coppola was insistent that he did not want to use any kind of contemporary special effects techniques such as computer-generated imagery when making the movie, instead wishing to use antiquated effects techniques from the early history of cinema, which he felt would be more appropriate given that the film’s period setting coincides with the origin of film.
He initially hired a standard visual effects team, but when they told him that the things he wanted to achieve were impossible without using modern digital technology, Coppola disagreed and fired them, replacing them with his son Roman Coppola.
As a result, all of the visual effects seen in the film were achieved without the use of optical or computer-generated effects, but were created using on-set and in-camera methods. 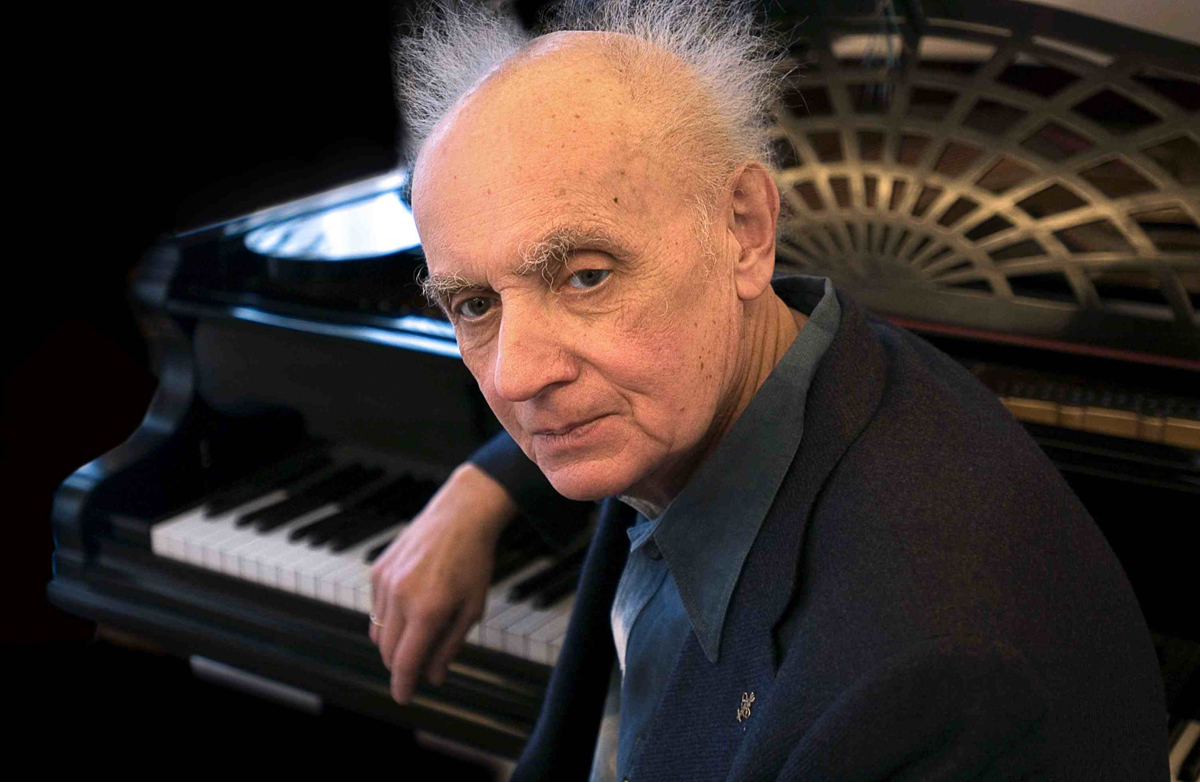 Wojciech Kilar‘s score was somewhat surprisingly absent from the nominations of any major awarding group; the film’s design elements received significant praise from both the BAFTA and Academy Award voting bodies, winning three Oscars.
Perhaps it was a lack of name recognition that restricted Kilar’s chances at the time (though he never fared particularly well with international awards until 2002’s The Pianist), because his music for Bram Stoker’s Dracula is a particularly memorable aspect of the production.
All of the over-the-top values assigned to the other appeals of the film are evident in this score, from the swells of morbidly romantic orchestral melody to the pounding choral passages of urgent and mighty terror.

In the few major, internationally distributed feature film scores of his career, this one remains perhaps Kilar’s most famous, even if it is not his best.
Ultimately, most of what you hear in Bram Stoker’s Dracula would be explored by the composer with more sincerity in forthcoming projects.
The tone and style of Kilar’s music is an interesting cross between his later scores for The Ninth Gate and The Portrait of a Lady (both impressive in their own ways), as well as a foreshadowing of the epic, resoundingly deep ensemble rhythms that Howard Shore would employ liberally in his music for The Lord of the Rings.
All you would need to do is emphasize the low woodwinds a bit more in a few of the Kilar cues here and this material could have eerily matched parts of Shore’s classic works in orchestration and tone.
The irony is, of course, that Kilar was originally offered the The Lord of the Rings assignment but declined.

There is much to impress in Kilar’s Bram Stoker’s Dracula, but it’s a score that will leave you wanting better cohesion every time you revisit it.